What is a day if not without crisis?

Emotionally, it was an austere day. A day of being patronised, being diminished and then appearing to ignore it. I do my work and overall it is pretty good so the cause of constant admonishment or anticipation of such does not lie there. I am being unnecessarily modest.

Lunch was a cup of coffee in a little bistro, with company that was discomfiting other than my friend. I noticed that name of the chip shop opposite had been changed. I am sure that many local people will still refer to it by its old name.

The afternoon was a car crash in slow-motion. An aggressive man barged and demanded the toilet. I could have stopped him but he was aggressively insistent. Pick your battles, I thought. Remember Elvis. Don't die over a toilet. As it were.

It proved a point how vulnerable we can be. We have no back door or fire escape.

The advice we have been given in case of fire is that we should throw a chair through the window. It is toughened glass and would bounce back to cause injury.

There is even amusement to be found in the cruel neglect of care. 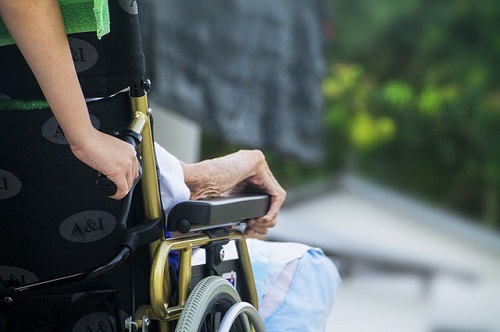 This evening I learned that Mam had been in a bit of a state all day.  Not even Vernon, whom she seems to favour over many, could ease her anxiety. This means that Mam must be in great pain.

Mam has an artificial knee joint and now needs another because of her arthritis and the pain she must feel from the two falls and leg breaks she suffered in the previous dementia care home. Mam suffers from osteoporosis.

The thought of being with Mam in an ever-frightening hospital ward, her in a state of growing anxiety, fear and distress again fills me with terror. My brother believes – and I agree with him – that it was the seven weeks stuck in hospital suffering and recovering from a UTI (urinary tract infection) that was the real accelerant of her neurological degeneration.

We learned that after suffering a UTI a person suffering from any of dementia types will recover; however, not to the level of mental capacity that he or she had previously. And, as we get older UTIs can become embedded in the bladder and unless the person drinks enough the infection will not be flushed out.

Each peak of recovery from an infection will be lower than the last and as the dementia worsens and voluntary liquid intake diminishes we have a descending gentle cascade of peaks of infection, recovery, infection. This is not a passive experience for a dementia patient.

As males, my brother and I knew nothing of UTIs and kept pushing for another B12 injection or adjustment to her laevothyroxine tablets.

A kind health care assistant in the hospital ward enlightened us and we were left in despair that there was nothing we could do in the long run to help her, other than keep offering tea and fruit drinks and monitor consumption.

Mam fell into such a deep depression and despair stuck in a side-room for weeks on end.

Sparse and Inconsistent Care of the Elderly

We knew nothing. Everything we learned was from the hospital staff, nurses and health care workers. We also learned that it was nearly impossible to find a place in a care home. Mam was sent to one of what are still called around here, a cottage hospital. Here we learned that isolated wards can become contaminated with resentment and proper care suffer.

Rather than engage to assist a dementia patient, I would receive a telephone call at 11:00 at night asking me to come over and assist trained staff. Sometimes I would receive the call on my way home from just visiting.

A room eventually came up in a local authority home and we were so grateful. Until she broke her leg a second time. Please be assured that the care there was wonderful. Just not enough staff. And too many corners to monitor.

My brother, who is a very busy businessman, was frequently close to tears of utter desperation. Me? I had learned many years ago to keep my nerve, which eventually made me ill. Not that there was much sympathy. An extended and terminal illness became an inconvenience to some people, and they never missed an opportunity to demonstrate and give vent in some contrived or indirect manner.

I knew that every remonstration was a punishment for daring to care.

Even now, hearing that Mam has another UTI makes me want to cry. Sometimes I can’t hide it.

It seemed that the paracetamol was having no effect whatsoever on Mam’s knee pain and I asked that she be given something stronger. While we waited, I sat with Mam and shared chocolates.

Tea would have to wait. Loving care was what was needed right now and I grew tired making excuses and promises that the nurse would be here soon and she could have stronger painkillers.

Margaret was much more intent on going home and once again I found lying in response to her enquiries very exhausting.

It is amusing and cruel to remember Margaret and Gwendolen waiting reasonably patient outside the small galley kitchen one evening. Unusual for them they were not moving, just waiting.

On asking one of the dementia carers I was told that they were at the bus stop waiting for the bus that would take them home.

Mum also wanted to go home. Maybe we could go home on the bus with Margaret and Gwendolen, I thought.

Pain, Anger and Frustration Beyond Explanation

It was obvious from the rushing around that the ward was understaffed this evening. Even the nurse had called in sick and we were sharing an agency nurse with the nursing home adjacent.

I am without doubt a kind and gentle person; what people would call The Family Mug. There’s always one in every family who’s left to do the work. I am Cinderella in drag.  Janine, my lovely distressed Janine, would not leave us alone this evening and Mam resented her constantly seeking attention. I got up and gave Janine a big loving hug and told her she looked as beautiful as ever.

Not as beautiful as Mam though, I added, and she gave me a big smile. June called her over to the table for a chat and to leave us alone. It is in Mam’s file notes that when she is unwell she hates being crowded. They are very switched on around here. Even when they are clearly physically exhausted.

Bosses always ignore that bit in case they have to pay more wages. No chance of that. It’s called ‘Hands-off-Management’. Nothing is wrong until something is wrong.

It really doesn't pay to be kind and caring. Sofia kept trying, quite aggressively, to steal the cups and my iPlayer while were holding them. I was so grateful that Mam fell into a light sleep that would remove her temporarily from her aching knees while I waited with ill-disguised impatience for the nurse.

We all hate seeing vulnerable people in pain and be unable to do anything about it.

While Mam slept Margaret and I watched the little Spider Monkey programme.

Gwendolen would stop and sit down with us for a pit stop on her endless journey and answer Margaret’s questions about bus times with some quite incoherent response. Margaret being very hard of hearing looked to me for a translation and I gained another credit toward my Boy Scout’s Champion Liar badge.

Mam would wake up now and then and want to go home. I’ve been asked to be here by about half past nine tomorrow morning, I told her. Once the doctor’s been we can go home.

There was no joy in Mam this evening. Vernon told me that she had even tried to claw him today and showed me scratch marks on the side of his neck.

I did not apologise because Vernon would not want me to. We understand each other enough for that not to be necessary.

Dementia Carers Are Your Extended Family

Time passed too quickly because my Mum was awake again by the time it came for me to think of leaving. The tea, toast and sandwiches arrived and I said that I was taking the cups to wash in the kitchen. She said to come back quickly. I took my iPad with me and left it on top of the cupboard in the kitchen.

Arnold was on duty tonight and he came and shook my hand. I like him as do the clients. He's a good man. The type of person, male or female, you are happy and glad to leave a loved one in their care.

I am so indebted to these wonderful carers who do this very difficult work with patients lost in their very personal dementia worlds of confusion, anger and fear. When I leave, even though I know my Mum will be upset, I know that they will care for her.

Curious that when I left the ward this evening everything about it slipped my mind. Mam even.  I put the radio on in the car to listen to heavy metal music, which is one of my counter-hits. Prince died yesterday and so every station is playing his music.

I switched off because I found it difficult to listen to all the professional grieving going on.

I must get up early tomorrow morning because we have decided to go out canvassing for something or other. I just nodded assent because it would get me out of the office. I am more asocial than ever these days and hate meeting people. I would sooner spend all day cleaning the house and pottering in the garden.

This sort of living is dangerous for health and wellbeing and I must find a way to stop it so that visiting my mother is made easier and not a crisis on top of all the other crap going on in my life.

At least I am now in a position where I can start paying for my mother's care and it will cost about a £1000 a month. My brother still has not responded to the invitation I've made to him to start paying his electricity and gas like the rest of us. And the council tax.

He must start because this kind of stress only adds to the rest of the big pile of crap I'm sinking in. I can’t push him too hard because he works even harder than I do, which is something. Other than him and my cousin, I have no other practical backup.

Friends are few because it’s less painful to look away.


Do you have any advice or stories to share?