Dementia types, as written elsewhere, are numerous. Dementia are unique in many ways according to their causes (e.g. Age, disease, stroke, cardiovascular disease, faulty genes, infections, alcohol etc.) although many symptoms presented are common to all. 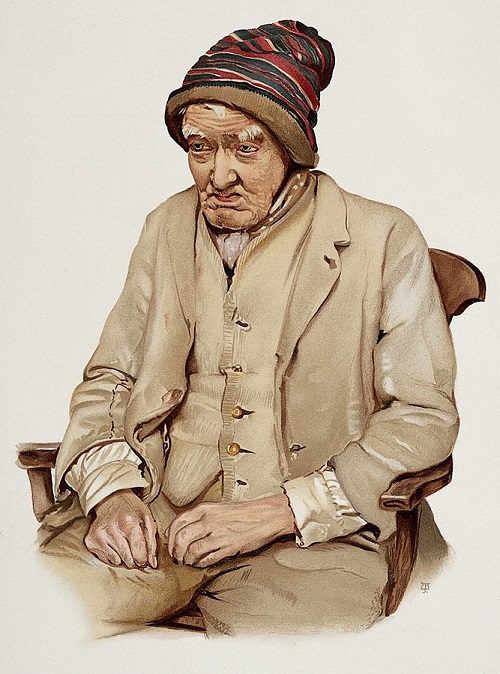 A Sad Image of Senile Dementia

Each person experiences dementia differently in the intensity of the symptoms that inevitably get worse over time as they increasingly get worse in how they interfere with daily living.  And although the symptoms are common each journey is unique not only to the person but also the carer.

A person suffering from dementia progresses from a state of agency and independence to that of complete dependence.

Alzheimer’s disease is the most common type of dementia and is progressive; so too the others.  Below is a reminder of  the percentage distribution of dementias among sufferers.

Alzheimer’s Disease damages the brain by the build-up of specific proteins that cause plaques and tangles. These structures interfere with the way nerve cells communicate with each other and result in the death of brain tissue. Personality will change as memory fails and thinking and decision-making gradually fails among a number of symptoms.

Of all dementia types, Alzheimer’s Disease is the most  prolific. More than half a million people in Britain suffer from this dementia and this number will continue to grow until a cure is found. Sadly, there is no cure in sight right now, but there is plenty of research going on. We can hope.  For more information…

In a healthy brain a healthy flow of oxygen is vital in maintaining proper functioning.  As in the name of this dementia, it is the vascular system of blood vessels that supplies oxygen around the brain. When these vessels are injured and constrict or weaken then the flow to areas of the brain is reduced or obstructed and nerve cells then die.

This disease is varied in how it presents, as most dementia types. It is progressive and a person suffering from vascular dementia will experience a decline in cognitive function (thinking, planning, decision-making), movement and personality changes among a number of symptoms.  For more information…

Mam suffered from mixed dementia, which is when an individual suffers the symptoms of both Alzheimer’s disease and Vascular dementia. This combined illness varies in the degree of how each component impacts on the person; nonetheless, the progression of the dementia leads to the same conclusion of diminishing cognitive functioning, speech, movement, loss of agency and total dependence on others for his or her care.

Dementia is a complex disease and because each person experiences the disease differently, it is also the case that other types of dementias combine to present different symptoms and to different degrees. For more information…

Lewy bodies are granular formations that develop in nerve cells the brain. These formations, discovered by Lewy, are made of a protein called alpha synuclein. How they develop is not entirely understood, but what is known is what is seen: a diminishing of the vital signals between nerves in the brain that allow the cells to work in concert for healthy living.

Because Lewy bodies are common to both Dementia with Lewy Bodies and Parkinson’s Disease, problems with movement, muscle stiffness, tremors and slowed become apparent in both diseases, on top of the expected dissolution symptom in DLB along with sleep problems and visual hallucinations. For more information…

This type of dementia is the result of damage caused to two important parts of the brain; the Frontal and Temporal Lobes. The Frontal Lobes, in essence, are where the major components of identity lie; emotions, feelings, behaviour, planning and decision-making. The temporal lobes function to facilitate communication; an important aspect of social living. Again, this is a progressive disease and the loss of the abilities above is the sad outcome.

Similar to other dementia types, there are a number of types of frontotemporal dementia which present with different and significant challenges.

Terry Jones, famous for, among other projects, Monty Python’s Flying Circus, suffers from a form of FTD called Progressive non-fluent aphasia. Cruelly, this dementia is the gradual loss of the ability to speak and to write in concert with typical symptology. For more information…

As stated above, dementia is a condition caused by damage to the brain. This damage can be caused, among other risk factors, by lifestyle, accidents, strokes, cardiovascular disease. Age is the most common factor. A cause might also be inherent in a person’s genetic information: faulty genes in the person’s DNA.

Each gene is important in the manufacture of specific proteins essential to creating vital tissues, organs and communication between brain cells. The proteins created by these faulty genes are component of a number of the dementias referred to above. For more information…

You may recognise a few of these very rare causes of dementia, either from the news or maybe you know someone or of someone suffering these illnesses that result in dementia by causing brain damage:

These conditions  can also combine with and complicate other dementia types. There are, sadly, more dementias.  As if each disease wasn’t bad enough on its own.

Although I am kidding when I ask the colleague at the supermarket exactly what I came I for, having been a carer for ten years in all the aftershock of Mam’s death has left me with an appalling memory and distracted to say the least. I regard this as my MCI and hope that it will pass as I recover.

Mild Cognitive Impairment refers to mild problems with memory, attention and language. While MCI is not one of the obvious dementia types in itself, a person suffering with this impairment runs the risk of developing dementia. An improvement in lifestyle (e.g. diet, exercise and sleep) can be a simple and significant way of reducing the risk of progressing to dementia. For more information…

Regular, high consumption of alcohol will cause damage to the brain, which we know causes the symptoms of dementia. Alcohol Related Brain Damage covers a number of conditions that will lead to dementia if the drinking does not stop. Alcohol is a very high risk factor.

One cause of Alcohol Related Brain Damage you may know about is Korsakoff’s Syndrome. It is a condition in people we insensitively call ‘drunks’ who have very poor memory retention and very poor lifestyles because of brain damage caused by excessive drinking. Each individual has undertaken an unfortunate journey of experiences to reach this state. This is a condition that can in some cases be reversed, although damage has occurred.

Excess alcohol causes chemical changes in the brain and shrinkage of tissue. Many regular drinkers in fifties and sixties do not realise the risk that they are taking because of their regular drinking. For more information…