Dementia Diary Day 19
Never Too Old to Fall in Love

Now that the Court of Protection has awarded us with the legal responsibility as Mam’s Deputies and guardians for her financial affairs, I confirmed an appointment with the bank manager in a few days’ time. Soon after I will receive a cheque book and can pay off Mam’s outstanding bills and also pay my brother for covering the Deputyship costs. 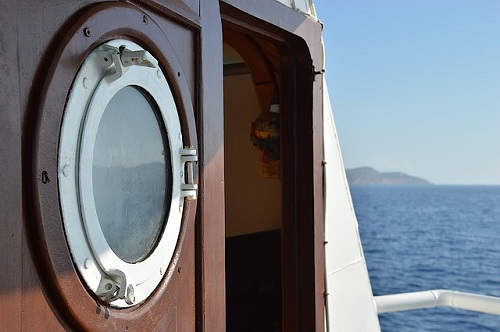 "Which cabin are you in?" asked Richard

My brother, and co-Deputy, paid the four hundred odd pounds it’s cost so far because I have very little money, just a cold house and brave little car that’s struggling and no means to buy another.

It was at work that I heard that Richard had died in hospital from the complications that attend pneumonia. He comes from the town where I work.

One of the basic facts about dementia is that most people who suffer from nearly all types of dementia die of pneumonia or COPD because of inactivity; the body needs pneumatic activity (walking and working of limbs) to ensure that no fluid gathers in the lungs or legs and yet, Richard was forever wandering around the ward, asking me what cabin I was in and ordering a cup of milky tea that he was surprised to receive a short while later.

I didn’t ask for tea. Might as well drink it now it’s here, I suppose.

I believe that I had become blinded to a plain fact that just because you suffer from any of the types of dementia types, it doesn’t preclude you from suffering other illnesses or diseases. Infections that the body might normally push away invariably prove fatal in the weakened frames of dementia patients.

I heard the full details from the dementia carers later. It was Richard’s birthday, as well, Mike the team leader told me. Michelle had taken time off her work to take Richard a birthday present from them all when she received a telephone call from Vernon to say that Richard had just died.

I like Michelle. She is barely five-foot-tall standing on a box of bananas and is always ready with a cuddle for patients and family. Hugs and cuddles are a major currency in dementia care homes.

There was a new carer there today. A slim, blonde and beautiful Romanian bombshell called Natasha, who fits snugly into a tight t-shirt and ridiculously tight jeans.

Am I being sexist in admiring her for being so sexy, I wonder? Probably someone out there who’ll complain. It does at the very least prove to me that I do have an emotional inclination lurking about in there somewhere. Curious that I would rediscover this standing next to a distressed dementia patient suffering from Alzheimer’s disease in a care home.

Valentina the nurse is leaving in a short while and I understand that she has been accepted as a nurse in the local hospital, subject to a probationary period. Good luck to her because she’s always been kind to Mam.

Janine was seated near the big windows overlooking the beautiful river, her back to it, and seemed to be in a chilled mood this evening and looking inward. That’s what it looked like to me; however, she might be viewing everything through an hallucination. I am pleased to see her calm at least.

Other than Mam and Sofia, Janine is the one who appears distressed most often.

A Desperate Search for Familiarity

Robert was very emotional. It’s like he’s bipolar these days, because either he is in a state of joyful euphoria or trapped in the coldest and darkest part of his personal hell. Maybe, the dementia is progressing faster than the visiting psychiatrists can balance his tablets. Robert was seated next to Mam groaning and holding head in his hands.

I got on my knees and gave Mum a big cuddle as usual and apologised I was late and blamed work. Mam looked to her left and frowned at Robert and said, I wish this man would go away.

Mam has smacked him in the past because his persistence in seeking attention brings him in too close and he has tried to kiss her. Sometimes the care workers must keep a close eye on him because he can labour under the misconception that one female dementia patient or other is his wife.

He will shout at her for not listening to him and can be very threatening. I have seen him being very angry with Sofia and be led away whining by one of the stronger male carers – usually Gerald.

Sofia lives in her own little world and would have been oblivious to his words and actions, but we have a fear of the violence that’s never far away with Robert at this stage of his illness.

I sat down next to Mam on the other side from Robert and could see that both Mike and Vernon were keeping a close eye on him from where they were sat with the other patients. Vernon gave me a wink. I nodded in understanding.

In the meantime, I chose to focus on Mam and switched on my iPad to show her pictures I have taken of my little greenhouse full of seedlings of all sorts of plants and salads. I told her that I also had a mix of tomatoes growing in a heated propagator on my window sill and we could both put them in big pots in her greenhouse in a month or so. Mam smiled at the plan; yet I am not reassured that she has understood me entirely.

Ah, all these sweet gentle reassuring lies to my own mother. None of us are liars in our family. We don’t appear to have inherited that gene. The Guilt gene, that, on the other hand...


Sometimes All Dementia Needs is a Little Nudge to Get Going

My cousin knows Janine, as Mam would have, and guesses that her neurological degeneration set in soon after her husband died. One of her daughters had to take over Janine’s small and successful business soon after.

The dementia would already have been there, and she might have secretly been fighting the disease with little strategies to cover errors like Mam had. Despair can make us succumb to illness quicker.

If you want to catch a cold quickly to avoid work just have someone break your heart. Guaranteed. Been there and received the emotional kicking.

By the way, the only person I know who looks out the window is Gwendolen and Heaven knows what she sees out there.  Usually it’s someone to shout and wave a threatening slipper at. Even though I am very wary of Gwendolen, I think the world of her.

Robert woke up from his mournful dirge-like reverie and leaned across to ask me something about fetching some stuff. He is not clear in his speech and I guess it has something to do with his job. I told him that we'll sort it out later and that he shouldn’t worry. Between us both, I am sure we can sort most things, I say.

Robert shook his head angrily, got up and shuffled away bent over with the unsafe gait of a person suffering from Alzheimer’s disease. The boys were watching where he was going. And no sooner had he gone than Gwendolen appeared from nowhere and joined us. She bathed us both in a lovely beaming warm smile and we smiled back at her.

Gwendolen, who has lovely white hair, looked slightly dishevelled and clearly had just got up to start her day at seven in the evening. She was in her thick woollen nightie and barefoot, complaining that someone has stolen her slippers, which is ironic for a determined collector of other people’s wares. We understand that she cannot stay long because she must go home and make lunch for her children.

Curious that. Mam also has a preoccupation of wanting to go and make food for us boys. The carers tell me that it is one of the main topics of Mam’s conversations with them during the day. It also explains that when I arrive during mealtimes she will try and share it with me. Michelle or June will usually bring me a plate of food and we have tea together although Mam will put someone on my plate to make me a meal.

Gwendolen left us and returned later wearing an odd pair of slippers, one of which I recognised as Sofia’s moccasin. Sofia called by behind us murmuring like a little bird and played with my hair. I smiled at her asking how she was and she reached across for a cuddle, which nearly crippled my back. Every time after that when she went past she reached over and touched my beard.

Mike told me once that dementia patients respond warmly to kindnesses and kind people. I remember nodding toward Mam and telling him I was trained by experts.

Lose Your Home to Pay Your Mother’s Care Home Bills

Later, Vernon told me about the serious problems facing Janine’s daughters, one of whom still lives in the family home. Janine’s dementia care home fees are way overdue. The family had given the business to one daughter and the house to the other. The business contributes toward her care, but clearly not enough. Now the house may have to be sold leaving one of them homeless – her the vulnerable daughter, too.

It's a cruel system. One that keeps me up at night worrying over my brother. At least, we are placing the debt we are incurring as a statutory charge on Mam’s house. This can be recovered in the future should the house be sold. Still, it’s a viable asset on the local Social Services accounts books and as long as there are no more cuts to local authority budgets we should be okay.

I tell Vernon that I have heard that a proposed sale for a nearby local authority care home has fallen through. If the care home is in good condition then there is profit in it for any company that wishes to buy it. They have a guaranteed patient for each bed, which can be as much as £30,000 a year. You can take that to the bank.

I tell him that I think that the deal fell through because there are too many corners in the council care homes, that are mostly used to house dementia patients these days.

My experience has shown me that most care home companies always work to minimal rather than optimal standards and if a home has too many corners then you need more staff. More staff, even working at basic wages, cut too far into potential profits.

I tell Vernon that I get the impression that the entire dementia care home system is balanced on a knife-edge of paranoid debt-management.

Before leaving, I told Vernon that I'm already in love with Natasha. He admitted the same. She is rather gorgeous after all.