I Can’t Even Look After My Own Money,
Let Alone Someone Else's

A day off from work today and a few very important jobs to do and to bring to an end all uncertainty about Mam’s finances. Because Mam has dementia my brother and I have been appointed her deputies.

Ever since my father died it has been me who has overseen Mam’s finances. Me, the most financially incontinent person I know.

For the last ten or eleven years I made sure that she always had money in her purse, that she could buy clothes when she wanted and that Christmas was not the scare-fest for her that it had become for me. 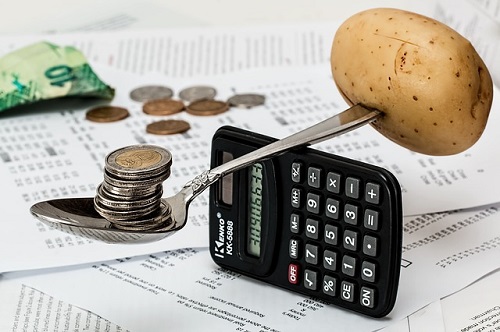 I can't look after my own finances, let alone someone else's

Mam used her debit card whenever she wanted - until she started to show the early symptoms of dementia (vascular dementia, as it turned out) and lost confidence in her ability to make choices and began to forget her PIN number. Sometimes it was there and sometimes not. I told her not to think when using her card and that her fingers would remember the code. There’s a lot to be said for muscle memory.

As I’ve written elsewhere, it was my desperate hope that Mam was just becoming older and things were beginning to slow down. Cognitive functions like memory do fade with age – if I remember correctly. Memory also suffers under stress, especially persistent stress. There’s nothing that brings on stress like knowing you are failing in something that you used to find so easy.

Bless Mam. She never left any water taps running. Maybe once or twice we could smell gas when we came in at the end of the day. Mam must have been preoccupied and did not turn the gas tap off completely. Anyway, we got away with it and didn’t mention it to her.

One instance that breaks my heart to remember, and is one of a few things that can make me come close to tears, is when I arrived home one weekend morning to find Mam with a massive black eye. She could not remember falling and unlike the classic example of domestic violence, maybe she had walked into a door.

My brother thinks it might have happened on her nightly wandering around the house. That we were not there to comfort her. That she must have sat down and cried all alone in her fear remains too much to bear.  But then again,

Dementia is a bastard of a cruel illness.

Would you trust me with your money?

Especially when I don’t trust myself with my own. I think I must have been spending a fair bit of my wage on smoking and drinking by then. I kept telling myself to keep my nerve, but needed addictive substances to achieve that aspiration.

I could have sorted out Mam’s finances in a half a day, but I took the whole day off. It was an ad hoc day’s leave, which must have caused some grumbling. After all, some people who do very little in the office would have to do something for a change.

Resentful? Me? You’d better believe it. It felt so good to have a legitimate reason to be away from the office. Stress and exhaustion aren’t good enough reasons. There would probably whingeing were I to have a heart attack.

Dad and Mam used Lloyds for all their banking as long as I remember, and I was fortunate that the bank manager, a woman, had been through this entire experience herself and made everything so simple for me. A set of simple questions about the Deputyship and about the standing orders for payment to charities and to lease companies for her television and washing machine.

Dad had been a plumber before he married Mam. He left grammar school when he was fourteen because he wanted to work with his father. In those days in the early 1930s a grammar school place was what all working-class parents wished for their children. Every parent wanted their child to do better; to become a teacher or work in a bank was the ultimate goal.

Each of his brother and sister went to grammar school. His older brother also left and joined the navy at fourteen years of age. He was the family genius among a group of very clever siblings and later went to prove just how clever he was.

The bank manager just metaphorically took my hand and told me where to sign. I would receive a bank card in a week or so, followed by a cheque book. All Mam’s finances were now in my name. It took about twenty minutes to do of all of this and yet I stayed with her for about an hour just talking.

It turned out that we shared similar experiences and she was passionate that people should prepare for their old age by making financial decisions well in advance of becoming old, frail and incapable. We should all prepare a Power of Attorney and let our children know our wishes for our care should we become incapable of doing it ourselves.

Looks like I’ll have to get myself an intelligent cat and hope it won’t squander the money on cat food and Readi-Pak mice.

Coping with my own ailments – Not!

My back is bad. I know the signs so well. When it snaps and muscles all along my back tear then I cannot move for fear of excruciating pain - and not the kind you pay for. When it goes it can take me two hours to get out of bed. Never let anyone help you move when you’ve got a bad back.

Like dementia, the characteristics of each bad back is only known to the sufferer. Touch me when I’ve got a bad back and I’ll scream and in five days I’ll come looking for you armed with a pointy stick.

It’s not far off going so I’m overdosing on ibuprofen anti-inflammatory tablets and wearing a heat belt. Before I come back into the town tonight I will need to have a very hot bath and achieve everything in a very short time before it pops. It feels like I’m managing it alright for a change and I might escape the agony.

By the way, if you’re over fifty years old do not use ibuprofen because I have been told, and there is a study out there, that confirms that it does more damage in the longer term.

I hope that my brother has gone to see his mother tonight. I never really know because of his heavy work schedule. I imagine Mam is sat right now having a snooze and will soon wake up and feel alone unless someone is with her.

I hope that she is not upset. I hope that the dementia care home is still maintaining its front of having adequate and brochure-promised caregivers on duty.

I have been at home since about four o'clock and have the whole night ahead of me.  I believe that I have now got into the habit of passing time until I can open a bottle of beer and smoke a cigar. That only happens on the even more exhausting days than usual, which is most of the time.

Why I haven’t collapsed yet, I don’t know. Probably genetic. Mam doesn’t seem to have stopped fighting. Maybe I have that share of her genes?

Other than arriving at work on time tomorrow morning I do not have any deadlines. It seems that I can now only live with deadlines:

I do this five nights a week. Sometimes seven, when people go on holiday.

Postscript: I used to have a life, I think

It’s a bloody miracle I’m still alive when you add all the above to workplace-related stress. When I’m not in the care home I find myself dreaming of being retired and just pottering in the garden, writing and cooking.

Anyway, right now I just do not know what to do with this spare time. Live long enough in half hours portions and you end up mortally asocial and struggle to function in extended periods of time.

I think I used to go out for walks a few evenings a week and definitely some part of the weekend.

I'm certain there was a time when I would go swimming at a local bay almost every summer evening.

I am just as certain that I used to go diving off the rocks, snorkelling and then sit in a nearby pub drinking a pint of excellent beer, eating pickled eggs while waiting for the salt water to dissolve sinus mucus that would spontaneously pour out my nose.

What fun we used to have.

Now I’ve run out of time. Just looked at my finances and realised the best thing I can do when I retire is drop dead.