As Mam’s vascular dementia progressed, it wasn’t the cupboards not closed, taps left on and food burned that worried me most, because these things can be remedied by careful preparation. It was the confusion in her eyes that was the greatest concern to me.

I once saw horror in her eyes. That scared me and is a memory I wish would diminish.

To say that we are our memories is to undervalue the seriousness of the loss. The disturbing implications of memory loss for identity was something that I noticed with the people who suffer the types of dementia I have encountered. 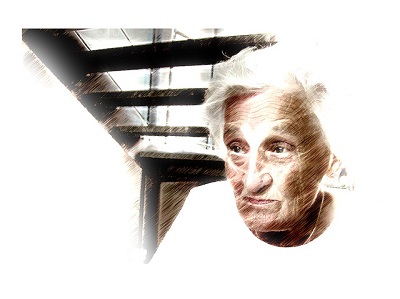 In psychosis, psychologists speak of a dissociation of the person’s identity and new and distorted or confusing views of a world they have lived in previously quite comfortably. We know our place in our social groups because we gather around similar values and live accordingly; decency or criminality, just two examples.

However, in dementia patients, as the brain is progressively damaged by stroke or plaque accretions in Alzheimer’s disease, memory loss steals those associations away from us. We are the associations we have formed. Gradual memory loss is an incredibly painful journey to watch. This is when I started to lie.

To this day, I do not know if I should have told Mam that she was suffering from dementia I do not know if I was coward for not being able to cope with the distress that would follow, or was I being sensible. After all, Mam was in her late eighties so I told her that we were become forgetful as we grow older.

I learned her stories and we would work things out together to reassure her and we would laugh at how forgetful both of us were becoming.

When the Vascular Dementia progressed beyond the early stages, the memory loss made her fearful. When we were together she believed my lies because she wanted to, but when she was alone, she was moving in a world of mist and could no longer identify those reference points that had made her who she was.

I Live in Fear

By now I know that if Mam is not sat in the lounge area then most likely she is in bed, unwell or exhausted by stalking up and down the corridor perpetually looking for someone or something.

Mike, the team leader had a very concerned look on his face when told me that Mam had been calling for me all afternoon, which meant that she would have been walking until exhausted. Never giving up until her body gave way.

Mike’s concern also told me other things as well: that her caregivers would have been spending a great deal of time caring for her. Also, because the ward is generally understaffed at least one or two carers, that because of the Vascular Dementia her behaviour was bringing a strain on resources.

David is Pushing His Luck

Heather, a carer, told me that Mam was down in the lower room, the television room where no-one sat to watch. Mam was generally put there to escape noise and chaos. She would just sit there.  I joked with Heather that she was probably helping David with his furniture dances and removals.

Mam was sat in one of the pointless and inappropriately long Art Deco chairs stretched back and holding on grimly to her Zimmer walking frame. She was watching David with an intense glare. David lives with no sense of the Other and will come across and attempt to take whatever his eye has alighted on. He is fearfully strong with a painful grip if grabs hold of you.

I knew that David would eventually push his luck and be told to bugger off. He was already in repetitive mood as it was and could not be reasoned with.

Mam’s chest sounded a bit congested. I gave her the usual big hug and she told me she was so glad to see me.

I think that Place is irrelevant for Mam by now. It is people she misses most of all, mainly me from what the care home staff tell me. So, I told Mam that we’d go make a cup of tea and somewhere I could distract her and try to avoid the usual wholesale lying in response to her making to get up and say, 'Let's go now.'

Mam is still looking for home although Mam no longer knows where home is.  I think that home is now an emotional security she longs for.  Being awake is a curse for Mam, as it can be for many dementia patients. Selfishly, when she is asleep life is easier for me. Where does she go, I wonder?

For Mam, I envy those dementia patients who have escaped into a world of hallucination like Gwendolen.

I sat Mam down at the large table and took the usual orders for teas and coffees, but not before sharing out some sweets. Gwendolen took out two and handed one back to me. She is on form and I seem to get away from the abuse and aggressiveness the others are suffering this evening.

In here I am a babe magnet. I think it’s because I truly value the power of a cuddle when given with real love.

Janine came up to me saying that she didn't know where her Mum was. I told her that she was dressed in pink and she was beautiful which made her perfect. She denied both. I said I disagreed and gave her a big cuddle and the moment of loss passed. For a while, at least.

Still there is no news of Rich. He is still in hospital and not better. Pneumonia strikes low even the strongest of us. However, the longer he suffers from pneumonia then it will become his terminal disease.

Mam looks to be in pain but sits down on a dining chair and l realise that she may well have wet herself. She insists that all is okay so I do not pursue it and allow her dignity. All surfaces here are washable and nobody makes a fuss, they just change the cushions. Mam finds the loss of autonomy and the loss of dignity quite injurious at times.

Sofia is a magpie, always looking to steal anyone’s cup.  She was moving furtively around the table eyeing up a target. She attempted to take Mam’s walking frame away from her and was snarled at. Janine, sat nearby, stood up and was also snarled at. Mam knew who Janine was in her previous life. I tell her so and Mum relaxes.

Time to make the tea and I asked her to keep the iPlayer behind her back so that Sofia does not steal it or Gwendolen secrete it under her sweater.

Love is the Anchor

I was talking with one of the carers in the kitchen while putting the kettle to boil and sorting out the cups in order of proposed distribution. He told me that I was an exception to many family visitors. Not only do I freely interact with all residents, but I anticipate and intervene.

Apparently, some family members are appalled by the very thought of doing this. Again, they do not see the plain and simple human desire to reach out for a warm hand, any hand, to hold onto it. Love is the Anchor.

If you can't be with the one you love, love the one you're with is one way of looking at it.

Sofia can't keep away from me and is forever crowding around, which on her own is alright, but then Gwendolen joins us and then Mary pulls up at the station to see what’s going on. They gather around Mam and before she can become distressed Heather and Vernon distract them away.

Back in the kitchen I kept a wary ear out in case Mam called for me. Mam has her cup of tea and I an extra strong cup of coffee and although we chat for a while she is in no mood for music or Songs of Praise this evening.

Mam was tired and in pain and eventually allowed kind Jane to take her to her room to the loo.  Heather follows to assist. The ladies will change her into her nightdress and dressing gown and bring her back to sit at the table.

Mam does not come back.  I put here straight to bed, said Jane. She’s exhausted and flat out. Go and say good night.

Mam was already in a deep sleep. I just kiss my fingers and touch her shoulder and tell her I love her.

Be safe in your dreams, I add.

I part for another night of being too exhausted to sleep and have to reach for a few bottles of beer.

I have to break through that box of rigid control somehow. I will crash otherwise and be of no use to Mam. It's the price of Love, I tell myself.

Still, I drink too much.