I regard the dementia at Mam’s care home and the carers as my new family patients and I visited once again this evening with my cousin.

My cousin is the only one of our family who actively wants to go and visit her aunty. That this is a dementia care home means nothing to her. That which is important is being who she is, the daughter of my father’s sister and his best friend. We have become equally best friends and I love her for her kindness and compassion. 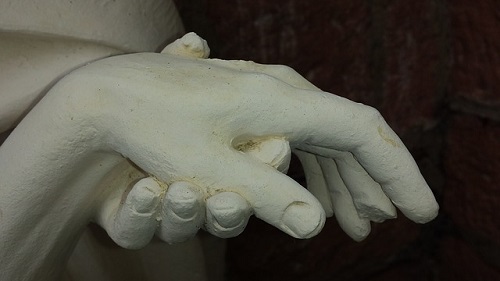 I think it was Sigmund Freud who defined Conscience as something that pre-empts decision. I am probably attributing that quote to the wrong person, but whoever it was is correct. Erich Fromm?

Your tummy is the base of your instinctive intelligence, I’d say. It establishes the sense of rightness if you are doing the wrong thing by yourself and another. The main weapon of your Tummy Conscience against you is Guilt.

My Cousin is Smart

My cousin decided that before coming in to see Mam she would traipse across to a nearby supermarket, pick up a few things and have a coffee. This was extremely kind of her because she didn’t really have any shopping to do and is not really a coffee drinker. What my smart cousin was doing was sharing the burden.

My cousin will arrive later to great fanfare and fuss, with a present and I would shuffle away while they shared stories and gossip. I would Go to fetch something from the car.

Despite all the love and caring in the world, a Saturday afternoon visit to Mam’s dementia care home can be emotionally draining. Recently, Mam has sat with me for a long time drinking tea or having a meal and then decides all of a sudden that it’s time we went home.

My heart sinks. It is always difficult to leave at times like this. I will have to lie, hope she falls asleep or just sneak away like the coward I know I am. My tummy responds at those times. My mind can override it temporarily; however, when I am at home with my bottles of beer, it hurts. That's when it really f*&?@$g hurts.

Why are all these people in the house?

Sometimes a dementia care home can be the best place in the world, full of noise and laughter. All the patients seem to be in sync and have stepped out of their illness and are all smiles.

I have learned that when a dementia patient does something daft, it is alright to laugh. You’re not laughing at the patient but laughing with him or her. You cannot help but laugh. The Tummy Conscience does not react because something is so funny that it pre-empts absolutely everything else. Also, there is frequently a desperate need to break the tension. And laughter is contagious after all. So, even though the patients don't know why they are laughing they join in. Even the perpetrator.

Laughter takes you a transcendental state. The mind can only think of one thing at a time after all. Laughter leaves a joyful and colourful shadow that hangs around.

For instance, we were once preparing to watch the international rugby live on iPad and patients and visitors were milling around. Everybody had a cup of tea and cake, visitors, staff and all who entered. We were waiting for the rugby to start when suddenly Mam looked around puzzled.

Why are all these people in the house?  She asked.

Her question was so unexpected that both my cousin and I started to laugh. We explained, quite rationally, that they were friends of my younger brother who had come to watch the rugby and would soon settle down in the parlour to watch the game.

Oh, she said and carried on as if it was reasonable.

That little gem carried us for a long time as a pleasant moment when even in her dementia had asked a completely reasonable question. Also, for those few minutes Mam felt at home where she was. In fact, it was her home.

I have given up attempting to diagnose the dementia types that the residents are suffering. Other than Memory loss being an early indication of Alzheimer’s Disease, which most suffer from, the aggression, frustration and wandering could well be a response to loss of autonomy.

Other than the unknown dementia diagnosis in their notes, all patients who are physically active or reasonably physically active, show deterioration, regrouping and stability and again. In the middle stages of Alzheimer’s, Frontotemporal Dementia and many of the other dementia types, you will find that one week a dementia patient can be in a poor state and then the next he or she is up and about.

I really like Janine because I have a vague memory of her working in a shop. That’s where all the numbers come from, I think. If Janine is dressed in pink I tell her that she looks absolutely stunning and so beautiful. And she does. Janine flushes pink herself and is delighted at the compliment.

Today, Janine was very talkative and insistent of attention, but rather distracting as I sought to engage Mam who was snoozing after tea. I was selfish for some crumb of normality to take home with me.

Contrary to Janine, Mary was in a very bad mood indeed and threatening to hit anyone who came near her, which she has done on a couple of occasions as her notes of the day recorded, I was told.

They won't let her go home and she was furious and kept coming back to me to ask where the way out was. I was told that she has been in a pretty bad way all week, her mood dark and aggressive. I only enter their lives in the evenings and know nothing of the gentleness or turbulence of their day.

The death of her friend goes unacknowledged by Mam

Richard, another dementia patient, has been taken to hospital because he has been declining all week. A friend had come to visit him - coincidentally someone who used to be in the choir with Mam. Learning that Richard was in hospital, she came and sat down with me and Mam.

She used to manage one of the better authority care homes many years ago, as well as being in the choir with Mum. I have heard that most of the remaining authority care homes were being adapted as dementia care homes. There are too many corners to monitor so I would expect many accidents and broken bones. We’ve been there.

The visitor had been to the funeral of one of Mam’s best friends in the choir that morning. Mam was shown the picture on the funeral pamphlet. There was no reaction of recognition from Mam. Thankfully.

I went looking for a blanket for Mam because the temperature control is not working well today. An engineer was supposed to call today and fix it. No-one seems to know if he had been. Chilliness indicated that he had not.

Confirmation at last that I am losing it

Two of the care workers, June and Michelle decided that I am slipping and recommended that I book myself in.

I had been looking out the window at a lateral branch off one of the large pines outside and commented that it would be nice to see a rabbit on it. Of course, I meant squirrel, but they were relentless in their ribbing.

We decided to leave early, just after seven, as Mam was sound asleep and we were both a bit stressed and tired from coping with Mary’s barrage of questions with the same lies over and over again.

We went to a favourite chip shop, ordered and ate fish cake and chips. Superb. Then a walk through a nearby woodland by the river to try and decompress. Too often have I been in the home near exhaustion and looked across to the walk on the other side of the river desperate to be there, but it would be too dark by the time I left.

I have lost the will to go for walks, other than up and down the track to my house, because it is too lonely. I think many family dementia carers suffer a loss of friends and social isolation compounded by depression.

We walk through the woods pointing at this and that and being fascinated by little things and hoping to see squirrels – not rabbits – up in the trees.

The kindness of others is always moving. I try to veer the conversation away from that which is all-consuming.