Frontotemporal Dementia is a consequence of damage caused to the cells Frontal and the Temporal Lobes of the brain. Each lobe carries out operations specific to each area and the dementia depends on the nature of the damage to specific areas of the brain. 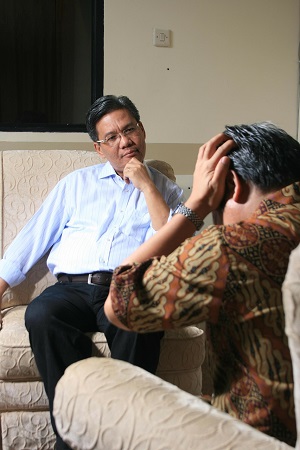 Dementia patients suffering from damage to the Frontal Lobe - which is behind your forehead - suffer changes to personality, emotions and behaviour as well as to their cognitive skills, such as reasoning, planning and decision-making.

The Temporal Lobes are on each side of the brain - directly behind the Frontal Lobes - and their main function in a healthy brain is in the understanding and use of language and knowledge and recognition of faces and objects.

As mentioned elsewhere, Alzheimer's Disease and Vascular Dementia tend to be most prevalent in older people. For those two dementias, Age is a significant factor; however, most people who suffer from Frontotemporal dementia can be much younger. About seventy percent of sufferers are between 45 and 65 years of age. This dementia is also referred to as a Young Onset Dementia - for obvious reasons.

One major consequence of frontotemporal dementia is that the frontal and temporal lobes shrink in volume, which obviously impact on the functioning of the brain.

There can be a build up of known toxic proteins in the lobes which will cause death of brain cells and impact on cognitive faculties as listed above. What causes the toxic protein build is not yet known. Tau, being one of these toxic proteins, is also a factor in the damage that causes Alzheimer's Disease.

Another cause of this type of dementia is a specific genetic disorder (mutation) that can run in families. This causes a sub-group of dementia known as Familial Frontotemporal Dementia. There is a fifty percent chance that the gene will be further transmitted. Young people in a family with a history of this particular dementia face a very difficult challenge whether to undertake genetic testing or not.

I will write more about the nature of genetic testing for dementia later and  of the difficult decisions that will arise. It can be a deeply emotional dilemma for parents.

The first three of these types of FTD above remain unique in their early stages and a dementia patient can have his or her dementia diagnosed as one of them. In the later stages of dementia the symptoms will have more in common with late stage dementia.

(Also, a patient can suffer one of the first three with one of the latter three conditions overlapping and bringing greater complexity to the dementia. More on this on another page).

This is a diagnosis that refers to behavioural changes caused by damage to the cells of the frontal lobe of the brain. It is social behaviour and personality that is most changed and it is manifested, for example, by a loss of inhibition uncharacteristic of the person in behaviour, a lack of sympathy or empathy for others. A cruelty to comments and views and a generalised apathy. More on these symptoms later.

This is caused by damage to the cells of the temporal lobe that function to understand language, recognise and name objects and people. When we are in normal brain health but stressed we can present with some of these symptoms: losing the meaning of words, cannot find the right word. As I write above, the early signs can be very subtle and misattributed.

As in all dementias they are complicated by where in the brain the cell damage occurs.The frontal and temporal lobes deal with language and speech.

Aphasia, simply put, means loss of language and the ability to articulate coherently. There is a loss of the ability to understand the complexity of conversations and a loss of fluency in speech.

As in many types of dementia the changes in the early stages can be very subtle and can often be misdiagnosed Atypical Alzheimer's Disease or misattributed to medical, environmental or psychological disorders.

Dementia diagnosis can be difficult because this is a dementia that affects younger people. Incidentally, there is no gender difference in the statistics of sufferers of Frontotemporal Dementia. Men and Women suffer equally.

The early stages can be difficult to diagnose; however, as the damage to the specific areas of the brain increases in severity the symptomology of these types of dementias frontotemporal share more and more commonality. The significant differences in the early stages of the illness become less. The symptoms of Late stage dementia are common to all.

There is currently no cure for frontotemporal dementia, although, thankfully there are medicines that can ameliorate the symptoms as they develop and dependency grows from autonomy to complete dependency.

As with Alzheimer's Disease and Vascular Dementia, the symptoms of frontotemporal dementia worsen over time. Some dementia patients suffer symptoms similar to Parkinson's Disease and experience difficulty with the most basic of functions, such eating, swallowing, walking and talking.

In the rarer dementia Creutzfeldt Jacob Disease patients can die within six months of contracting the disease. However, people suffering from frontotemporal dementia can live as long as fifteen years. Many of those years in complete dependence.

Younger people who are diagnosed with FTD face very severe consequences. They may have young children, be the main breadwinner and with mortgage payments to service.

In the Late Stage Dementia the severity of the disease can bring very serious challenges to family, friends and professional caregivers. That this dementia FTD occurs in relatively young people because of the major changes in behaviour. Referring back to Behavioural Covariant FTD above, the disinhibition in the early stages and a tendency to excess can create havoc in families.

Frontotemporal Dementia causes devastating effects on the sufferer. In all dementia types the impact on family, friends and dedicated caregivers can be traumatic. Caregivers must take definite steps to ensure their own wellbeing otherwise they will not be able to continue to support and care for loved one.

This latter point refers to my area of expertise as the long term carer for Mam. I got much it wrong with regard to my own health and wellbeing.

This website is called Dementia Devotion because it requires devotion to care for a dementia patient. But if you disregard your own health then you will not be able to fulfill your role. You will eventually find plenty of advice on this website. The dementia patient is on an inevitable journey and while the carer must ensure the dignity of the patient, he or she must survive to live their own life afterwards.