It has been a day of extraordinary news about Huntingtons Disease.

A medical experiment carried out at the Leonard Wolfson Experimental Neurology Centre in London and other centres around the world have shown that it is possible to slow down the disease and reportedly even reduce the amount of cell killer protein Huntingtin, in the brain. 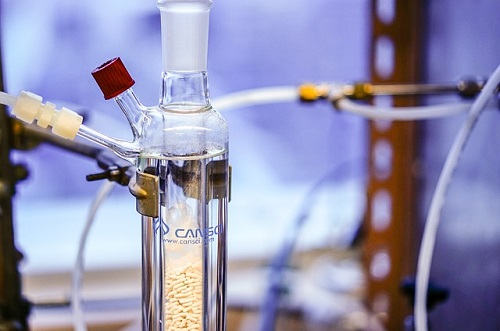 Like many types of dementia, Huntingtons Disease seemed to have had no possibility of a cure until today. There has been no potential intervention therapy to slow down its determined and inevitable physical and cognitive neurodegenerative damage in the brain.

To put in an understandable context, this I sort of like finding a cure for cancer. Early days, we know, but its significance cannot be overstated. Not only for Huntington’s Disease but for other neurodegenerative diseases like Alzheimer’s Disease. Until now, this has been a hopeless disease.

According to the BBC, Experts believe that this could be the most significant breakthrough in neurodegenerative diseases for 50 years.

So, what has happened that gives rise to hope?

Medical scientists at the Leonard Wolfson Experimental Neurology Centre revealed that they carried out an experiment in genetic manipulation by injecting a drug called ISIS-HTTRx, (discovered and developed by Isis Pharmaceuticals) into the spinal fluid (Cerebro-Spinal Fluid - CSF) to improve delivery into the brain.

Huntingtons Disease is caused by an error in a section of DNA called the huntingtin gene. It is the function of DNA to produce proteins that the body requires for correct functioning. However, in some people specific genes are damaged and so, rather than produce the protein huntingtin - a beneficial protein important in cell development in the brain - the gene produces an aggressive and detrimental protein that undermines natural processes by killing brain cells.

According to the Leonard Wolfson Experimental Neurology Centre,

‘ISIS-HTTRx targets the huntingtin message molecule, telling the cell to dispose of it, thereby reducing production of the mutant huntingtin protein.

ISIS- HTTRx  ‘Gene silencing’ drugs, also known as ‘antisense’ drugs, are designed to reduce production of a chosen protein by attaching to the mRNA ‘message molecule’ that’s made whenever a gene is activated. ISIS-HTTRx targets the huntingtin message molecule, telling the cell to dispose of it, thereby reducing production of the mutant huntingtin protein.

‘The trial is set to recruit patients with very early symptoms of Huntington’s from six centres in Europe and Canada.’ 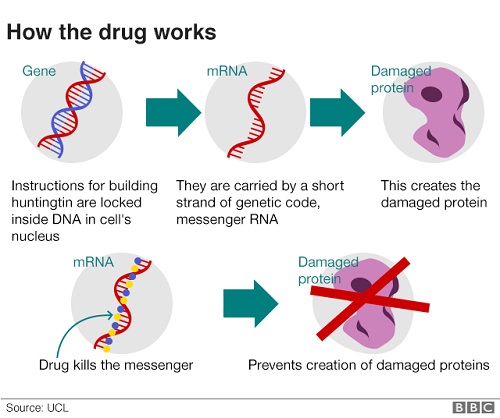 Prof Sarah Tabrizi, director of the Huntington’s Disease Centre at University College London’s Institute of Neurology and UCLH consultant, is the global chief clinical investigator of the trial, [said],

“I’m thrilled that this antisense drug has now been safely administered to the first patients. Families ravaged by Huntington’s disease have been waiting for this milestone for decades. I look forward to ensuring the smooth running of this first trial and hopefully seeing ISIS-HTTRx through to efficacy testing and licensing.”

Information links at the bottom of this page.

An Excited, Yet Nervous Reception to the News

There will be many families around the world who are holding their breath in hope that the medical experiments and studies carried out on 46 volunteers is the opening of a doorway into new research for a full cure or significant intervention for those already suffering.

These families with members affected by the faulty huntingtin gene will be hoping for swift, if not rapid, progress with the promised medical trials.

Quite naturally, we are all nervous about how far this research will take us toward finding a cure for Huntingtons Disease. We hope for at least some intermediate intervention in the next few years. Even slowing down the progress of the huntingtin protein will be significant.

We have embrace a heavy caveat to temper our excitement and expectations, because doctors are wary of calling this a cure. Data gathered from long-term research and data collection is required before ISIS-HTTRx, or a derivative, shows whether lowering levels of huntingtin will change the course of the disease.

However, families with young children suffering Huntington’s Disease can for a while look at their children differently. With better hope than before that they may live fuller lives.

What is Huntingtons Disease?

Huntington's Disease is not caused by injury in the form of a stroke but is an inherited disease. It is a familial dementia where one of the parents carry a damaged gene. Each child produced by the relationship carries a fifty percent chance of suffering this dementia type.

Damage to nerve cells in the brain is progressive and the area becomes atrophied and the function of that location of the brain deteriorates accordingly.
The progression of Huntingtons Disease is relentless over ten to twenty years as the individual loses the ability to care for him or herself. Huntington's Disease affects every aspect of a person's life as it progresses relentlessly.

Diagnosis at the clinical level is not always entirely specific to the illness. Tests for diagnosis of Huntington's disease still tend to be based on those employed for identifying Alzheimer's disease and are weighted toward memory deficit. Current research presents the proposal that other cognitive deficits impact on the person before any memory deficit and there should be a focus on these.

Some of the rarer dementia causing diseases occur in cruel partnership with the more frequent. For instance, there can be an overlap between Huntington's Disease and frontotemporal dementia (FTD) in some people. There can also be great similarity in some components of the constellation of symptoms. For more, please Click Here…

Go to the Guardian newspaper